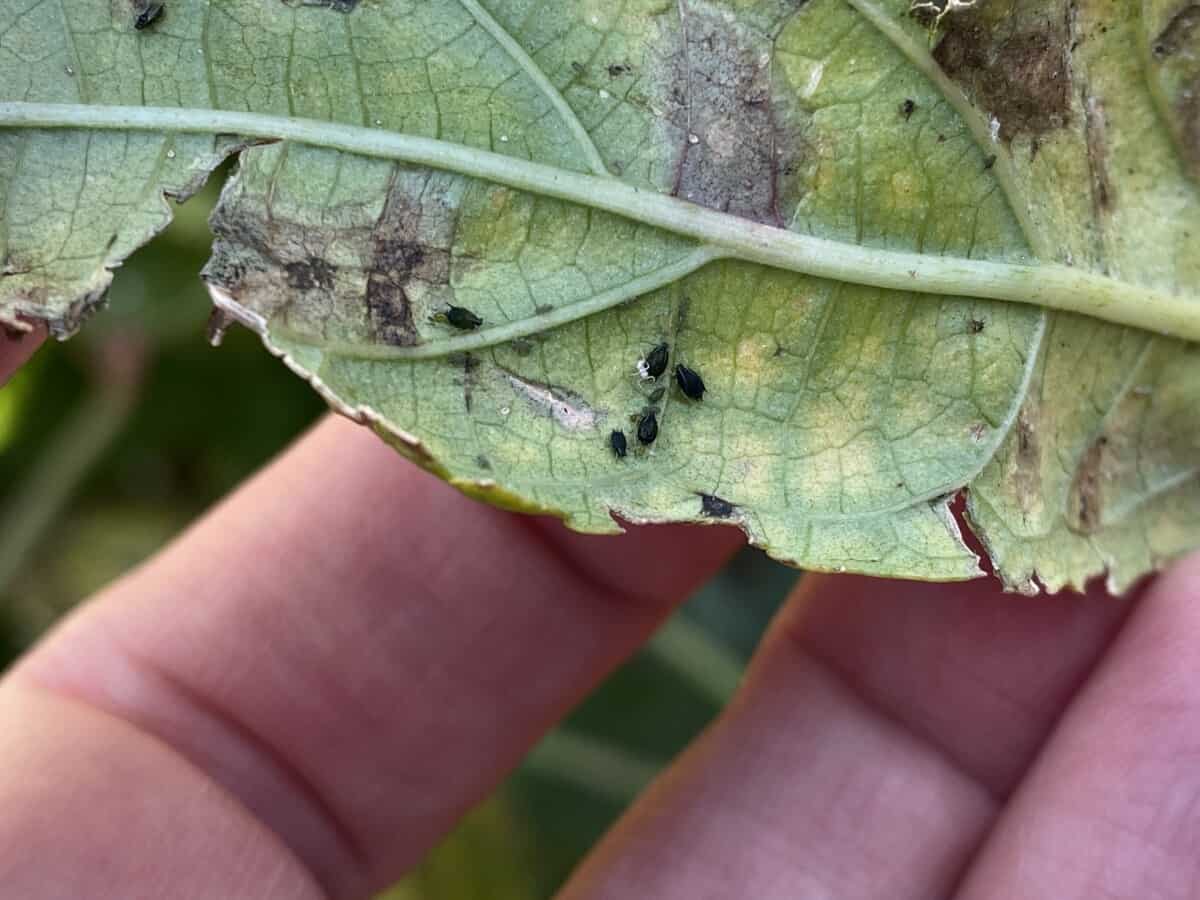 If you’ve ever seen aphids in your garden, you might have wondered if they pose any risk to you or your family.

Do aphids bite? Can they survive on skin or hair, like lice do? Can they hurt my children in any way?

The good news for gardeners and their families (including furry friends) is that these questions have very clear-cut answers.

In general, aphids cannot harm humans. Unlike thrips, which can bite and leave minor rashes, aphids do not typically puncture or irritate skin since their mouthparts (known as stylets) are designed for piercing plant tissue. Aphids cannot survive in hair or cause any harm if accidentally swallowed.

There’s both scientific and anecdotal evidence about thrips’ ability to attack and bite humans. But when it comes to aphids, I’ve only seen a few extremely rare accounts of them doing something similar (more on that below).

Aphids are also known for spreading hundreds of different diseases, but those are plant diseases spread from plant to plant. Aphids cannot transmit diseases to humans or animals.

In other words, the only actual harm aphids can cause is the temporary revulsion someone might feel if they realize that they’ve got aphids on them or that they’ve accidentally eaten aphids that were hiding in their veggies.

This nearly happened to me recently when I was about to cook some newly picked Red Russian kale and realized, at the last moment, that there were a few dozen aphids clinging to the undersides of the leaves.

(When I saw them, I took a few quick photos, which you can see in articles I’ve written on getting rid of white aphids and determining whether or not to throw away a plant with aphids.)

But if you’ve been gardening for a while, you’ve likely outgrown some or all of the initial revulsion you experienced when it came to garden pests like aphids. I deal with bugs all the time in my garden, so they no longer bother me. (Except roaches. I still can’t stand roaches.)

Of course, no one wants aphids in their garden—or in their house or on their skin or in their hair or food. But rest assured, aphids might look a bit gross (especially when they gather in clusters), but they can’t harm humans, only plants.

Let me take just a moment to explain why exactly aphids can’t bite humans and also unpack why it’s fairly common for people to wonder if they might.

Despite a few rare exceptions, aphids cannot bite humans. Their mouthparts are designed to pierce plant epidermis, not human skin. Evidence suggests that pea aphids and a gall-forming aphid native to Taiwan are the only aphid species that can prick humans and cause minor skin irritations.

Aphids do not have a mouth, jaws, or teeth. Instead, they have tiny, needle-like mouthparts called stylets that they use to pierce plants’ epidermal layer. Once they do so, they search for phloem tissue, which are cells that transfer nutrients throughout the plant.

Once they’ve pierced the phloem tissue, they begin siphoning off the plant’s organic nutrients—which are sometimes colloquially referred to as “sap”—sucking them out of the tissue. This process leads to foliage discoloration and eventual plant decay.

Apgids might be small, but they’re not dumb. They’re not going to go looking for phloem tissue where phloem tissue doesn’t exist. They will not attempt to pierce human skin nor will they be able to do so in any meaningful way.

Biologically speaking, they’re just not cut out for that. But there are two rare exceptions.

Can Aphids Cause Skin Irritation?

So let’s now take a closer look at those exceptions.

Aphids typically can’t bite humans and won’t cause any skin irritations. However, research shows that the Ceratoglyphnia styracicola aphid, which is native to Taiwan, as well as the pea aphid (Acyrthosiphon pisum) are known for occasionally biting humans and causing skin irritations.

But let me repeat, these are exceptionally rare occurrences. I’ve only found one account of pea aphids biting humans. In this instance, a researcher had been handling pea plants, then noticed a pea aphid pricking his hand. This only happened once in his life, and it was likely caused when the aphid was temporarily confused by the pea scent on the researcher’s hands.

In terms of C. styracicola, a Japanese research team has investigated these bugs and published their findings. Among the most interesting facts they discovered is that, unlike all other known aphids, C. styracicola become surprisingly aggressive when disturbed and will bite humans and cause skin irritations that can last anywhere from a couple hours to a few days.

These aphids produce galls, which are swollen plant tissue (somewhat akin to tumors) that protect developing larvae. According to the researchers, a single large C. styracicola gall can provide protection for approximately 100,000 larvae.

But here’s some great news in case you’re worried: You can only find C. styracicola around Sun Moon Lake in central Taiwan.

This is why I feel comfortable suggesting that, in general, aphids can’t harm humans.

Are there a few recorded instances where aphids have bitten people? Sure. But those instances are so incredibly rare that they’re almost not worth noting except to combat misinformation that might be found elsewhere on the web.

Simply put, you don’t need to worry about biting aphids if you’re out in your garden.

You should worry about the harm they’ll cause to your plants–and work to stop your aphid infestation as soon as possible using the information I’ve provided in articles about black aphids, green aphids, and white aphids–but you don’t need to worry about your health or safety when working around aphids.

Are Aphids Harmful to Dogs or Cats?

If you’re a gardener or an animal lover (or both), you might have wondered if aphids can do any harm to dogs or cats. Fortunately, this is an easy one.

Unlike fleas, ticks, mosquitoes, and other bugs that can hurt pets, aphids cannot harm animals. Dogs and cats can theoretically transport aphids if the bugs get caught in their fur, but aphids won’t survive for long in fur and cannot bite animals or spread disease.

If you think your pet has been bitten by something, these are the likely culprits:

Unlike aphids, these pests can harm both dogs and cats, so get your pet checked by a licensed professional if you think your dog or cat has been bitten by something in your garden.