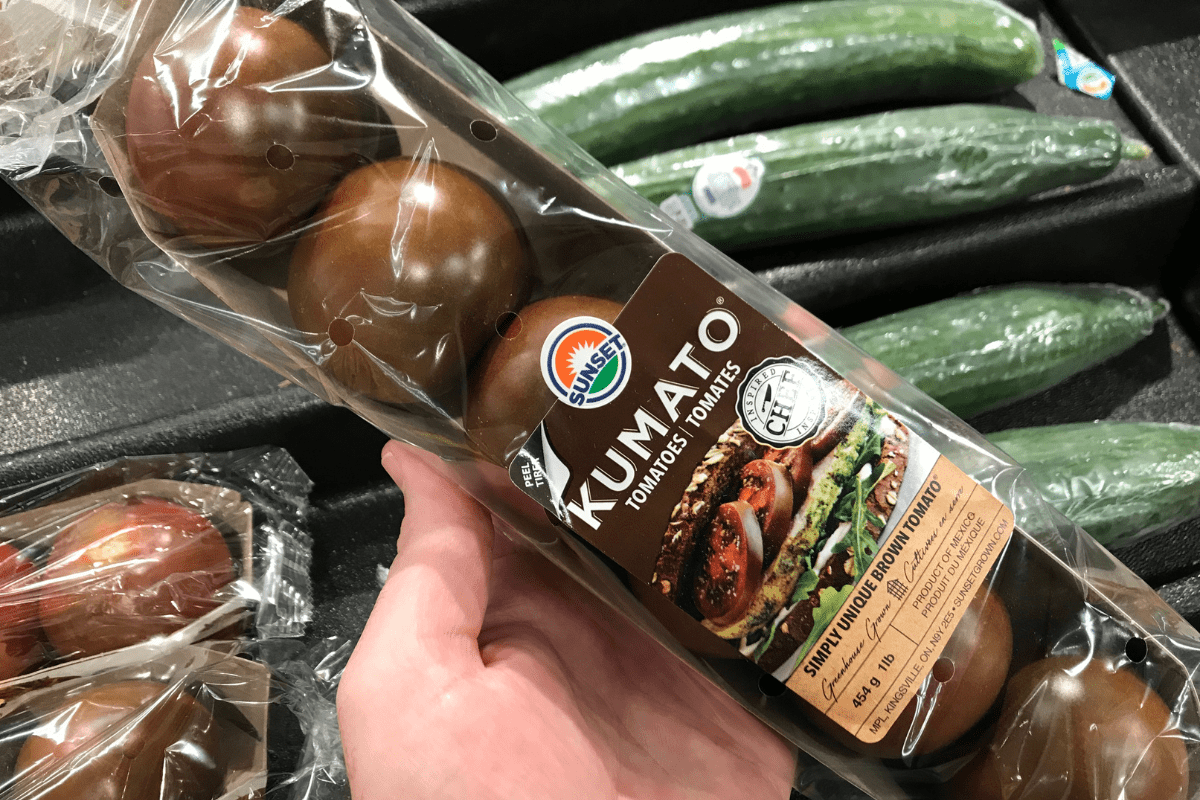 But many years ago, when I was still a novice gardener, I wondered what would happen if I harvested seeds from a hybrid tomato plant, then planted them the following season.

What I want to do in this article is share all that I’ve learned about harvesting seeds from hybrid tomato plants. To make it as simple as possible, I’ve divided the article into four separate sections:

When I harvested seeds from my hybrid tomato plant, I had no idea what would happen if I planted them. Would the resulting plant grow well? Would it produce any tomatoes? If so, what would those tomatoes look like, and would they be tasty or bland or somewhere in between?

If you’re ever been curious about what’ll happen when you plant seeds harvested from hybrid tomato plants, then keep reading. You can also skip ahead if you just want to see the results of my experiment.

One final note: If you’d like to follow the seed-saving recommendations that I share below, you’ll want to get your hands on these items. I’ve been storing seeds this way for years, and I absolutely love this system.

Before we take a look at the results of my hybrid plant seed harvesting experiment, I want to make sure that you know the primary factors that differentiate heirloom tomatoes from hybrid tomatoes.

There’s a lot that could be written about this subject, but I’ll keep things simple by providing a basic overview.

One final word about flavor and taste: I’ve researched literally hundreds of hybrid tomato varieties, and I’ve grown many of my own.

When people say that heirloom tomatoes are “better” than hybrids, they might be right. But I’m willing to bet that they haven’t conducted taste test competitions pitting several hundred heirloom varieties against several hundred hybrid varieties.

My advice for tomato lovers is this: Don’t avoid hybrid plants just because they’re hybrids. Figure out which tomato plants grow best in your region (both heirloom and hybrid alike) and grow both.

That way, you’ll be able to do your own taste comparison and determine which plants you like most.

Saving Hybrid Tomato Seeds: What You Should Know

Have you ever considered saving seeds from hybrid tomato plants?

Or maybe you end up using my links below to take a look at Victory Seeds’ dwarf tomatoes or the hundreds of varieties available via Renaissance Farms.

Wherever you get your seeds, you’ll have a decision to make once those hybrid plants eventually start producing fruit: Should you save the seeds?

A few years back, I decided to harvest seeds from Kumato tomatoes in the hopes that I would enjoy the outcome (since I had liked the originals).

But as I now know, if you’re thinking about harvesting seeds from hybrid tomatoes, you should answer these 3 questions before doing so:

If you answered “yes” to these 3 questions, then I think you should save some seeds from a hybrid tomato and plant them next season to see what happens. Here’s why:

If you’ve got room in your garden and don’t mind an additional plant, then saving hybrid seeds could be a fun way to grow a similar (but different) tomato plant.

But if you’re strapped for space–maybe you live in an apartment or have a very small backyard–then I wouldn’t recommend doing so. You need to maximize what little space you have by growing the very best plants possible.

If you’re the kind of person who enjoys trying new things–including things that haven’t been tried before–then harvesting seeds from hybrid tomatoes could be a lot of fun.

Since hybrid tomato seeds aren’t stable, they’ll produce a plant that’s unlike the original plant in some way or another. It might look similar and produce similar fruit. Then again, it might not. There’s simply no way to know.

What this means is that you might be growing a one-of-a-kind plant, so as long as you’re willing to experiment, you could be eating a very unique tomato once your plant matures and begins producing fruit. How cool is that!

As you’ll see below, my experience harvesting Kumato tomato seeds and growing a new plant was…not ideal. But even though my experience wasn’t all that great, yours could be completely different.

More importantly, I’m the kind of person who enjoys surprises, and although this particular surprise wasn’t what I had hoped for, I enjoyed the fun I had along the way.

Simply put, if you’ve got the space, if you like experiments, and if you enjoy surprises, you should definitely save seeds from your favorite hybrid tomato plants and plant them next year.

You won’t know whether the experiment was a success or not until your tomato plants mature, but no matter what ends up happening, you’ll have fun doing so!

What Happens If You Plant Tomato Seeds from a Hybrid? My (Failed) Tomato Experiment

I purchased Kumato tomatoes at a Trader Joe’s some time back because I thought they looked interesting and wanted to give them a try. Sure enough, they were pretty tasty, so I decided to save the seeds even though I knew these were hybrid tomatoes.

At this point, I simply used the same process I always use when saving tomato seeds:

When the next growing season rolled around, you probably know what happened: I planted my seeds in a planting mix while things were still cold outside, then placed my seed planting containers on top of a heat mat and under grow lights.

When the seedlings started to form, I got pretty excited since I had no idea what was going to happen in the coming months. Perhaps unsurprisingly, the seedlings looked like any other seedlings, and the plant grew as expected.

When the fruit began to develop, my excitement increased because the tomatoes were looking great, especially as the green fruit started slowly showing brown colors that are typical of Kumato tomatoes.

The fruit ripened much slower than my other tomato varieties, but this could have been due to the hybrid seeds I was using or the Texas heat (or both).

Finally, after waiting weeks for the fruit to ripen, I saw several tomatoes that were ready to pick. Before prepping my favorite summer tomato dish (a caprese salad), I sliced one of the newly-picked tomatoes and took a bite.

To my great disappointment, it was tasteless. As tasteless as a cheap store-bought tomato. As bland as the tomatoes they serve at fast-food restaurants.

Simply put, it looked like a Kumato, it smelled like a Kumato, but it wasn’t a Kumato. It was a look-alike variant of a Kumato that had everything going for it except the most important thing: flavor.

To be clear, this does not mean that seeds harvested from hybrid plants will always produce tasteless tomatoes.

What this means is that it’s an experiment with no guarantees. You literally never know what you’re going to get.

This is why I only recommend harvesting seeds from hybrid tomatoes if a) you’ve got room in your garden for an experimental plant, b) you enjoy the experimental process, and c) you like surprises, even when things don’t go your way.

If this is you, then I think you should absolutely harvest seeds from hybrid plants.

You can’t know until you try!

Hybrid Tomatoes: Are They Better or Worse Than Heirlooms?

As I noted above, hybrid tomatoes and heirloom tomatoes have distinct differences since the former are often bred for pest and disease resistance or for commercial shipping.

However, this isn’t always the case. In fact, there are hobby breeders all across the world who are breeding new tomato varieties each year, and most of these tomatoes are hybrid tomatoes since they don’t meet the requirements to be considered heirlooms.

But many of them are also delicious since they’ve been bred for taste, color, and texture, often by people who care deeply about tomatoes (instead of corporations who care mostly about disease resistance and commercial shipping).

Take Victory Seeds, for example. They have a section of their website devoted to selling tomato varieties that have been created by members of the Dwarf Tomato Project, garden hobbyists who are creating new dwarf tomato varieties for people who want to grow tomatoes but don’t have a lot of space.

Or take a look at Renaissance Farms. Located in Bloomington, Indiana, and owned by a guy who jokingly goes by the name Curtis T. Maters, this company sells more tomato seed varieties than any other site I’ve ever come across.

He sells many heirloom varieties. But he sells all kinds of hybrid varieties. In fact, there are so many different seeds for sale on the Renaissance Farms website that it would take most people years, if not decades, to grow every single variety found there.

This is why I don’t like it when bloggers make overly simplistic comparisons between heirloom and hybrid tomatoes. There are just so many new varieties out there, if you know where to look and you’re willing to experiment.

So unless someone’s conducted a bona fide taste test competition featuring dozens of heirlooms paired off against dozens of hybrids (like the kinds you’ll find on the websites above), I don’t buy the heirlooms-are-alway-better argument.

Of course, heirloom tomatoes are often fantastic, but there are just so many tomato varieties out there–and so many of them are hybrids that have only recently made it to market–so I’m as excited to try them out as I am to grow my favorite heirlooms.

And who knows, maybe I’ll experiment again sometime soon by harvesting the seeds from one of my hybrid plants.

Have you ever planned out your garden, then realized you weren’t exactly sure how many plants you needed to feed yourself and your family? When I was a beginning gardener, I remember times when...

Continue Reading
link to How Do I Get My Pothos to Flower? Things to Consider

Pothos are one of the easiest, most forgiving indoor houseplants. They’re great for beginners, there’s several dozen different kinds to choose from, and they produce leaves in a variety of...

Backyardgardengeek.com is a participant in the Amazon Services LLC Associates Program, as well as a few other affiliate programs, which provide a way for gardeners like me to earn a small commission for referring traffic and business to Amazon and other gardening-related companies...at no extra cost to you. These commissions help me maintain this site and continue publishing helpful articles for fellow gardeners.